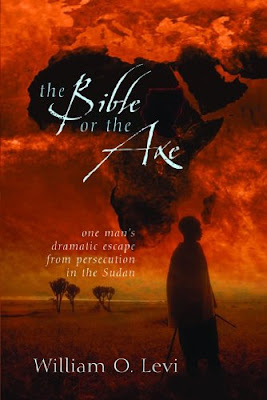 I can't tell you how many times I've seen grown married men ogling young women in church. It makes me cringe every time I see it. Sometimes I wonder where all the godly men are? Then I read a book like "The Bible or the Axe" and I'm reminded there still are some around. :)

The author of this book, William O. Levi, writes about his life in the Sudan. When things got hard for Christians there, he decided to go to America. On his way he stopped in Cairo where he stayed with some "Christians" he meet there. But as he says here:

"...later discovered that they had abandoned their Christian faith and were only superficially interested in following God, if at all...The pursuit of alcohol and women was more important in their lives than the pursuit of holiness."

One night these guys were getting drunk and had a prostitute come over. William was very uncomfortable and was mocked by his new friends when he spoke against what they were doing. He derived a plan, a plan that changed some of there lives forever. The next time a prostitute came to the door this is what happened:

"Would you like something to drink?" I offered her some hot tea as she slipped into our apartment.

She nodded but kept her eyes lowered and her veil wrapped tightly around her head and shoulders. My roommates' eyes were fixed on me, registering an expression somewhere between morbid curiosity and disbelief. Quietly, they took their seats within easy earshot.

"Have a seat." I motioned to an empty chair near our common table.

The woman reminded me of a shadow sinking in the twilight as she obliged. She dared a glance at my face, as if to question the terms of our encounter. Ever so slightly, her eyes moved to calculate the number of men in our group. With any luck, this would be the only door she would have to knock on this night. I smiled at her, in a ridiculous attempt to feel more at ease, and I took a seat across from hers. I cleared my throat nervously, without risking a glance at my friends. I figured they would be smirking at me.

"I am wondering," I began, "how a fine Muslim woman like you came to visit us tonight in this way. Please tell us about yourself."

The woman stiffened in her chair, and her complexion paled a bit. This was certainly not a part of the bargain.

"What do you want from me?" she demanded. Her nostrils flared slightly, like a spooked horse, and I could tell by the pulse at her neck that her heart was pounding. She had good reason to be terrified. The only thing worse than abuse and indignity she suffered from her customers was the prospect of being brought to justice in the courts of Islam. I suspected that if she were ever caught, the law would not be too forgiving.

"You are informants!" she declared. "I will not speak to you."

"I give you my word, we will not turn you in. We do not wish any harm to come to you. In fact, we want to help you. I am a Christian. My beliefs allow intimacy only within the sacred bonds of marriage. I know that as a Muslim, you also value chastity."

The woman's shoulders relaxed a bit, and her gaze dropped to hands that were folded primly in her lap. She pinched her lips tightly together. "I have children, you know."

"I love my children more than life..." She looked around the room, seeking empathy--or at least understanding. "I must care for them. What can I do?"

It was not a question meant for answering. Postures shifted uncomfortably as my roommates tried not to think of how they took advantage of women like her. Slowly, the woman's story came out. It was not easy for us to hear, or for her to tell. My friends remained silent as stones.

I turned to her and extended my hand in friendship. "We don't want anything from you. You don't need to sell yourself to us."

I gathered together ten Egyptian pounds and pressed them into her hand. "On belhalf of all the men in this room, take this money and go home to feed your children. This is the beginning of good things happening in your life."

The woman initially stared at me with her mouth agape, and then her slight frame was racked by uncontrollable sobs. Tears filled her dark eyes until they slipped slowly from her lashes. She never had reason to expect kindness from anyone, especially men.

"God loves you; that is why we are helping you," I said. "Jesus can bring you forgiveness and healing. But you must want to change your life. With God, all things are possible. Would you like me to pray with you?"

After the prayer, she dried her eyes, accepted my prayers and the money gratefully, and left in peace.

My roommates were stunned and convicted by what they had seen. It was awhile after the woman had left before anyone found the courage to speak. Finally, one of them took the initiative. Grinning sheepishly, he slapped me on the back.

"Yeah. Maybe you aren't such a fanatic after all."

The episode with the prostitute proved to be a real turning point in the lives of several of my roommates. It was quite disturbing for them to look at that woman as a real person and not an object for sex--to see the consequences of their own sin in the life of a poor, destitute mother. The Holy Spirit convicted them of their need to live lives of compassion and purity. Some prayed for salvation and some rededicated their lives to Jesus." (from chapter 12)

I believe William did what Jesus would have done...and that's why his pursuit of holiness is becoming a reality.