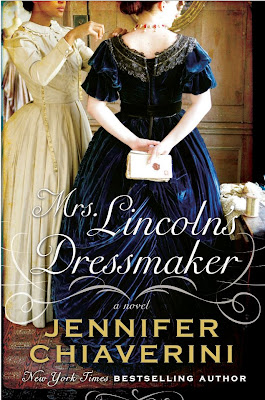 I really enjoyed reading this historical novel about The Lincoln's and the woman who, not only made Mrs. Lincoln's dresses, but became a good friend to them both.

"Elizabeth Hobbs Keckley was born a slave. She earned her freedom by the skill of her needle and won the friendship of First Lady Mary Todd Lincoln with her devotion."

This book was filled with a good balance of dialog and history. Though if you are not a history fan you may find some of it a bit dry. I personally loved it. : )

It starts out on election day November 1860, when Mr. Lincoln became the sixteenth President of the United States. Elizabeth is a well-loved dressmaker in Washington City and in March of 1861 she is asked by Mrs. Lincoln to become her personal modiste (fashionable dressmaker).

Here begins a four year long friendship with the Lincolns filled with good times and many sorrows.

Mrs. Lincoln came to depended on Elizabeth as a stable and encouraging friend when she herself was often not liked by her peers. She was prone to hysterics and often spoke her mind when she shouldn't have. In Mr. Lincoln frequent absents, Elizabeth was often her rock.

Elizabeth's dressmaking skills were well known and sought after. Here are a couple of the beautiful gowns she made for Mrs. Lincoln. 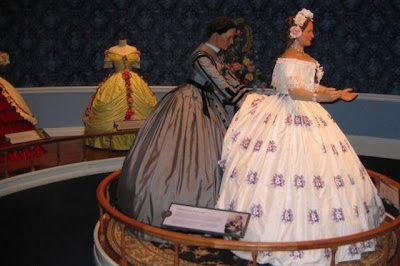 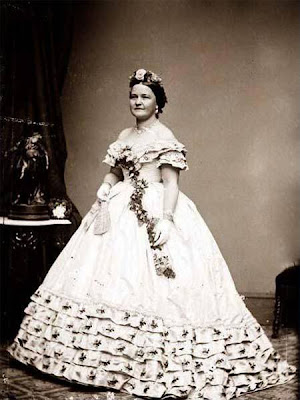 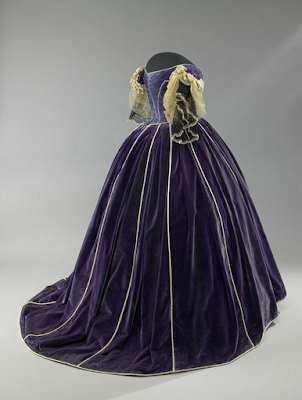 I found myself admiring Mr. Lincoln even more after reading this book. He was such a kind, thoughtful and good-natured man. He sincerely cared for people and worked diligently to set the slaves in his country free.

President Lincoln was well loved and it was humbling to hear of black men and women, who had been slaves at one time in their lives, praying together for a white leader. During a freedom rally at a church Elizabeth visited, the pastor ended his sermon with this great commission which really moved me:

"Just before midnight, the minister's tone changed again. 'At this time I want no one to pray standing up with bowed head,' he intoned. 'No sister sitting down, with bended neck praying, and no brother kneeling on one knee, because his pants are too tight for him. I want all of us to get down on both knees to thank Almighty God for our freedom and for President Lincoln too."

This next passage from the book really struck me as well. Mrs. Lincoln is trying to teach her son Tad, and he is being very difficult. Elizabeth is looking on and thinking:

"Then it occurred to her that if Tad had been a colored boy rather than the son of a president, and a teacher had found him so difficult to instruct, he would have been ridiculed as a dunce and held up as evidence of the inferiority of the entire race. Tad was bright; Elizabeth knew that well, and she was sure that with proper instruction and hard work, a glimmer of his father's genius would show in him too. But Elizabeth knew many black boys Tad's age who could read and write beautifully, and yet the myth of inferiority persisted. The unfairness of the assumptions stung, If a white child appeared dull, he and he alone was thought to suffer from a lack of intelligence or a deficient education, but if a colored boy appeared dull, the entire race was deemed unintelligent. It seemed to Elizabeth that if one race should not be judged by a single example, then neither should any other."

Oh how true and sad this is still today. So many still judge a whole nation or nationality on a few. We need to look at people as individuals.

I felt such pity and sadness in Mrs. Lincoln's part of the story. Three sons passed away before they reached adulthood and of course the loss of her beloved husband. She sought solace in things, such as mediums, instead of in God and never seemed to find peace.


After President Lincoln was assassinated Mrs. Lincoln received a letter from Queen Victoria of England, which was so thoughtful and prized above any other letter of condolences she received. Here is the letter:

Though a stranger to you I cannot remain silent when so terrible a calamity has fallen upon you & your country, & must personally express my deep & heartfelt sympathy with you under the shocking circumstances of your present dreadful misfortune.

No one can better appreciate than I can who am myself utterly brokenhearted by the loss of my beloved husband, who was the light of my life - my stay - my all - what you suffering must be; and I earnestly pray that you may be supported by Him to whom alone the sorely stricken can look for comfort in this hour of heavy affliction.

With the renewed expression of true sympathy, I remain, dear madam,

Queen Victoria didn't have to write such a personal letter to someone she had never met, but she did and it was a great comfort to Mrs. Lincoln.

Mrs. Lincoln was an addictive shopper and continually over spent. After President Lincoln's death she was in debt and decided to sell her many dresses. They weren't selling and she ended up getting herself involved with some swindlers who convinced her they could sell the dress. She ended up losing more money. This was even more devastating to Mrs. Lincoln and her reputation. All along this trying time Elizabeth stood by her side and tried to help the best she could.

Elizabeth decided to write a book to vindicate Mrs. Lincoln and the gossip that surrounded her. Unfortunately it backfired and made Mrs. Lincoln even more embarrassed. She then severed ties with Elizabeth forever.

The book Elizabeth wrote included private letters Mrs. Lincoln had written Elizabeth, which the publishers printed at the end of the book without Elizabeth's consent. Elizabeth was mortified. I recently picked up this book and have just begun reading it, and I have to say when I started reading these letters, though she is long gone, I felt like I was intruding on the first lady's privacy. They are so personal. She was a hurting woman who had lost so much in her life and never seemed to find peace.

I also felt for Elizabeth and how her book ruined her reputation and career. She had such good intentions to bring Mrs. Lincoln into a better light among her peers, but instead the book hurt them both.

'Mrs. Lincoln's Dressmaker' was such a great book. I enjoyed spending time in the White House with the Lincoln's and the many people, especially Elizabeth, who shared it.