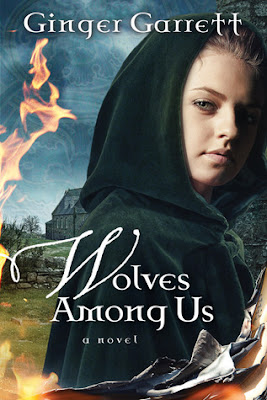 This novel gave me a lot to think about. The history of the witch hunts is not so long ago and it still goes on in many countries today, just with a different face and name.

In this novel a double murder takes place in a small German village in 1538. The priest decides to call in an Inquisitor, and pardon my language, but then all hell breaks loose. A witch hunt pursues and many innocents are accused.

As it was taught, women, through Eve, were the source of all evil and temptation.

And someone must pay for the sins committed by men, who are believed to be bewitched by women.

So the witch hunt begins.

In the authors afterwards under the subtitle 'Gender Roles and the Church' she writes:

"According to medieval religious belief, evil existed outside of men and inside of women. This theory was the backbone of witch hunts. When the Age of Enlightenment swept through Europe, these theories about witchcraft and women's nature were discredited - and the church lost its credibility too. This is why teaching about gender differences and gender roles must be undertaken with extreme care and extreme attention to the Scriptures. We must be careful never to put words into God's mouth.

The reality is that no one understands the complete truth about men and women, our chemistry together, and how each gender is a unique reflection of the divine nature of God. But we do know this - when we finally see God's face in heaven, we will fully understand ourselves, each other, and God."

In God's eyes men and women are equal. Equally sinful, equally offered the gift of grace.

All those who come to Him are set free in Him. We do not have to pay for our own sins, nor someone pay for anothers sins. Christ paid the price for us all. This is a truth that many medieval people did not understand or know because the Word of God was keep hidden from them. And that's when historically, superstition has abounded.

Unfortunately, we still see this today in many countries around the world and this is why it is so important we get Bibles to them.

To share the Truth. The truth that they are beloved by God...equally.

I'm sharing two organizations which not only distribute Bibles to people who don't have a way to get one, but also support and help women who have been persecuted... for just being women.

You can help and make a difference.

Firstly, is Open Doors an organization that was started by Brother Andrew of Holland. you can read my thoughts on his book 'God's Smuggler' HERE. Open Doors is an amazing organization that has brought many Bibles to those who may never have had a chance to read one otherwise.


The Voice of the Martyrs


These kinds of books are not meant to be read and forgotten. They are meant to urge us on to do something. So check out these sites and see what they are doing to help. You may find yourself called to help too. : )