The World of Jesus: Making Sense of the People and Places of Jesus' Day 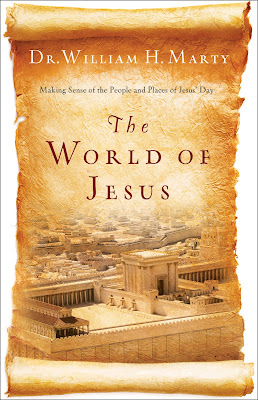 Have you ever wondered about Israel's history in those 400 missing years between the Old and New Testaments? Was God still working His plan through Israel? Where did the pharisees and suducess come from? Was any Biblical prophecy fulfilled during this time?

This book explores all these questions and more.

I found it brought the Bible and history together to give us a better understanding of God's plan. It starts during the exile of the Israelites to Babylon and leads us to the time of Christ, giving us a deeper feel of where the world was when Jesus was born.

The book is divided into 8 chapters on different periods of history:

1. Homeward Bound: The Persian Period
2. Alexander the Great: The apostle of Hellenism: The Greek Period
3. A Courageous Priest and His Sons: The Maccabean Revolt
4. A House Divided Against Itself Cannot Stand: The Hasmonean Period
5. Herod the Great: 'The Client King': The Roman Period: Part 1
6. "The Paranoid King': The Roman Period: Part 2
7. Jesus and the Herodians: The Early Church and the Herodians
8. When Religion Gets Sick

Here's a few facts that I found fascinating:

During the Babylonian exile many Jews learned Aramaic and it continued through the years..."Many Jews at the time of Christ spoke three languages - Hebrew, Greek, and Aramaic."

"...until the Babylonian exile, the descendants of Israel had been called Israelites. Why were they all called 'Jews' thereafter? Apparently it was difficult to pronounce 'Judahites' in Aramaic, so the Babylonians shortened the term."

2. On Jesus and tradition:

"Ezra...according to Jewish tradition was the first scribe. Over the centuries, the scribes became the Law's official interpreters, and they made judgements on religious and legal issues. By the time of Christ, their legal decisions had become official in oral tradition.

Many of the conflicts between Jesus and the religious leaders were about these scribal traditions. The Pharisees and scribes repeatedly accused Him of breaking the Law. However, He never violated the Law of Moses. He often disregarded scribal interpretation of the Law because it violated the divine intent of the actual Law God gave to Moses for the people (Matt. 23)."

This made me think of all the traditions passed down through Christianity as well, and how important it is to stay true to God Word, and to not put emphasis on tradition.


3. On Alexander the Great:

"Josephus, a historian from the Roman period, later said that when Alexander threatened to destroy Jerusalem and the temple, the high priest Jaddua met him and read passages from the book of Daniel that predicted his victory over the Persians. Alexander was so impressed that he exempted the Jews from paying tribute and permitted them to live according to their own laws. According to Josephus, some Jews even joined his army. These intriguing accounts suggest an openness to Hellenism by some Jews in order to preserve their traditions (Antiquities of the Jews 11:8.4-5)."

"Then a goat “came from the west” (Daniel 8:5) with a single horn between its eyes. The horn represents the king, Alexander. The goat killed the ram and “became very great, but at the height of his power his large horn was broken off” (Daniel 8:8) – a prediction of Alexander’s untimely death. In Daniel’s vision, the single horn is replaced with four new horns, which are “four kingdoms that will emerge from his nation but will not have the same power” (Daniel 8:22). The four new kingdoms are mentioned again in Daniel 11:4, which says that “his [Alexander’s] empire will be broken up and parceled out toward the four winds of heaven. It will not go to his descendants, nor will it have the power he exercised.” These passages describe, two centuries in advance, precisely what happened to Alexander and his empire."

I found this so interesting! Both the prophecies of Daniel, as well as the historical account of Alexander meeting the high priest.

"When Jesus was born, Israel was a Roman province ruled by Herod the Great. Rome had given Herod the title 'King of the Jews'...

From a human perspective, Herod was a ruthless tyrant. Still, God can accomplish His good purposes through evil human intentions and actions. It is unlikely national Israel would have survived Roman conquest and domination without Herod the Great-the Romans would probably have totally destroyed Israel and dispersed the Jews all over the world much sooner then they eventually did in AD 70.

God used Herod to preserve his chosen people and keep the nation intact until the time came for Him to send His Son, the promised Messiah, the world's Savior."

The more I think about this, I find a greater understanding of the sovereignty of God. He really is in control.

Though I didn't agree with every assessment the author made, I found the book fascinating. And because I love history, I felt this was a great read that I can recommend.