What is Absolute Truth?

I recently read a friends Facebook post that asked, 'what do you believe to be an Absolute Truth - no swaying from it, no denying it, it's the same for all people.' Most answered in a joking manner, and it got me to thinking how many people today don't take truth seriously, or at the least, don't know how to answer.

I don't think it was a coincidence that at this time, I was reading a book called, "The Beauty of Intolerance' by Josh McDowell and his son Sean McDowell, that talked about this very thing. 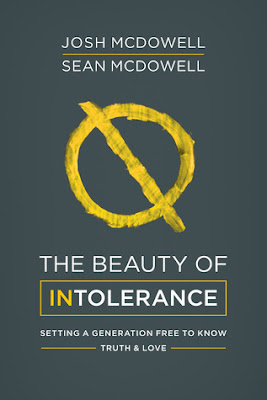 The first few chapters were frustrating and sad to read because they shared how the culture is changing and how moral issues are no longer considered moral issues. It made me think of this verse:

Woe to those who call evil good, and good evil;
Who put darkness for light, and light for darkness;
Who put bitter for sweet, and sweet for bitter! Isaiah 5:20

But chapter three really stuck out for me and was so encouraging! Because as the authors say here:

"Moral truth isn't simply an abstract concept; it originates in a person who is the original and standard for morality."

They continued with this:

"Jesus said, 'I am the way, the truth, and the life' (John 14:6). Moral truth ultimately finds its source in a 'who' not merely in a 'what.' In other words, moral claims are true if they correspond to the character of God - who is the objective source for morality.

It is God's nature and character that actually determines moral truth.

He defines what is right and wrong, good and evil. But truth is not first and foremost something He decides; it is something He is."

Earlier in the chapter they say this:

"The concept of truth often seems abstract or philosophical to the present generation. But when we understand moral truth from the biblical narrative, it becomes innately concrete and relational."

I love this...the God of the Bible is our strong Rock and our faithful Father. Not a concept or idea.

A lot of this chapter is geared to young people because they are primarily the ones being indoctrinated with a perverted new moral code in our society today.

"Our young people need to understand that the reason we have this concept that some things are morally right and others are wrong is not because a church propagates it or even that it is written in a book called the Bible.

The moral authority of the Bible isn't found in its commands and rules. The authority of Scripture is derived directly from and founded in the very character and nature of God and represented in the flesh through Jesus Christ. All moral truth resides in and comes from God."

They then share these examples of reasons for truth:

The reason we think there are such concepts as 'fair' and 'unfair' is because our Maker is a just God and we have been made in His image. (Gen. 1:27)

The reason love is a virtue and hatred a vice is because the God of relationships who formed us is a God of love.

The reason honesty is right and deceit is wrong is because God is true.

The reason fidelity in marriage is honorable and infidelity is not is because God is faithful.

The reason chastity is moral and promiscuity is immoral is because God is pure."

They then continue with this:

We need to help our young people realize that God's Son, Jesus, is the embodiment of moral truth and that true freedom comes from embracing and living the truth of God."

“And you shall know the truth, and the truth shall make you free.” John 8:32

"When they come to realize this, they will begin to understand that they cannot create their own brand of morality. Unchangeable morality already exists as a universal truth because it comes from a personal God."

They go on in this chapter to explain the history of western thought, through the Renaissance, to the Enlightenment, to the Industrial Revolution. And also touch Modernism and Postmodernism and how these ways of thinking have shaped our culture from belief in Scripture and God being absolute truth, to man becoming central and the worshiping of self.

This is just a short look at this book, through chapter three, and I highly recommend it! It was so interesting and helpful. It reminded me a little of Francis Schaeffer's book, 'How Should We Then Live' which was also very good!

Both these books will help in understanding the Truth and how it's been viewed and distorted throughout history, and yet the Truth hasn't changed. He is the same yesterday, today and forever.

I'll leave you again, to ponder the words of Jesus: