For the Right Reasons

I never thought I'd write about a book that was written by a reality TV star! But I was curious to what he would say about faith, love and marriage, and I have to say I was impressed.

Also the blurb on the back of the book, by Jefferson Bethke (author of 'Jesus > Religion'), caught my eye. : ) 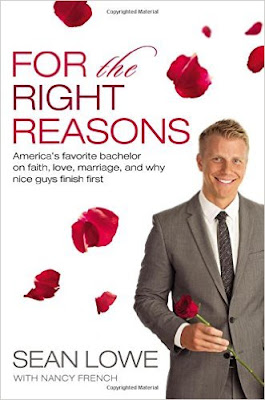 I've always been fascinated by reality TV. My favorites are reality home improvement shows. I love, love, love Chip and Joanna Gaines on 'Fixer Upper.' They are a beautiful example of love and commitment between a husband and wife working together.

Sean Lowe didn't watch the Bachelor, but his sister did, and she signed him up without his knowledge. When he got the call, he had no intention of going, but later changed his mind. Now I'm not endorsing meeting your husband or wife on reality TV but after reading this book I can't deny God's hand brought Sean and Catherine together.

My favorite parts of this book were Sean's dad and grandfather's wise input. Sean first went on the Bachelorette with a woman named Emily Maynard. His dad shared this story with Emily while filming...

Emily says: 'Sean's so much different than the rest of the guys'

'How so?' replied Sean's dad

'His faith is so evident in the way he acts around me.'

Sean's dad: 'Well can I tell you a little story?' he asked. 'The day Sean was on his way out to the airport to fly to Charlotte to start filming the show, he called me. I was in the locker room at my gym, but I made sure to pick up..."

"...I told him Sherry (Sean's mom) and I would pray for him, that I loved him, and that I knew God would use him somehow in all this.

Fifteen minutes later, I was out in the gym exercising when a guy tapped me on the shoulder. He said, 'You don't know it, but I was standing behind you when you were on the phone..."

"...He said, 'I heard what you said to your son, and it made me think that I need to get my life right with God. Just hearing you say you loved your son and that you would be praying for him made me realize how far away I have gotten from God. Anyway, I wanted you to know that God is already using your son because your conversation got my attention."

And Sean's grandfather shared this bit of advice with Sean as a teen.

Sean once asked him:

"Do you believe Mimi (his grandmother) is your soul mate?

He looked at me a little funny. To him, the phrase soul mate was hippie language. 'Well, I'll tell you this. I think men have the ability to be good husbands or not. I don't think there's just one magical person out there for you. Proverbs 18:22 tells us, 'The man who finds a wife finds a treasure, and he receives favor from the Lord.' Note that the Word doesn't say, 'the man who finds that certain someone.' It's less specific than that. You find a wife, you get favor from God. It's not all that complicated."

This is wise counsel to ponder. Marriage isn't about finding your 'soulmate', but rather it's work and dedication and commitment on both sides. No matter who you marry.

I really enjoyed reading about Sean's spiritual growth and also Catherine's. It is always nice to hear of Christians who are moving forward in their faith.

Sean says here of recommitting himself to the Lord and reading His Word:

...my Bible knowledge had never gotten deeper than those Sunday school stories. When I recommitted myself to Christ after college, I recommitted myself to reading the Bible. I would read a few chapters in the Old Testament, then a few in the New Testament. The more I read, the more my faith grew - by leaps and bounds. The Bible was surprising. Unexpected. Frequently, I'd read a chapter and think, I didn't know that was in there!"

I loved that Sean and Catherine's relationship wasn't all peaches and cream. That they fought to stay together and are committed to one another. 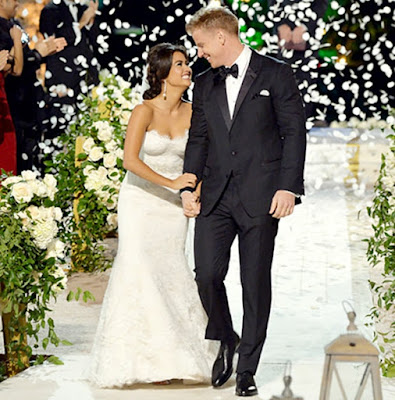 They say God work's in mysterious ways and this is no exception! These two were brought together in the weirdest way possible, reality TV! Just goes to show God can work through anyone and any situation. He is good. : )


But it HERE on Amazon