99 Stories of the Game by Wayne Gretzky 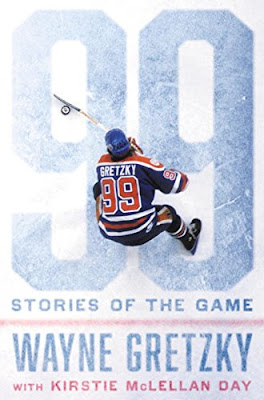 I was raised on Hockey Night in Canada.

Though I'm not a huge hockey buff or follow every move in the sport, it's always been very special to me. Special because watching those games, as a child,  was when I bonded with my dad. My dad loves hockey and he rarely missed Hockey Night in Canada. If we wanted to watch TV that night, we had to watch hockey.

My dad always included his daughters in the game. Always happy to answer our endless questions about what was going on. It was his way of showing us he loved us and we felt it in his respect for us as girls watching hockey.

When I saw this book I just had to read it and I'm so glad I did. It's filled with stories from the 99 years of hockey history written by one of it's greatest players, Wayne Gretzky. These stories are not only informative of the sport, but also filled with many heartwarming stories.

One of my favorites was of Hall of Famer Ted Lindsay who in 1966 decided not to go to the awards ceremony, because women were not allowed. He wanted his wife and family to share in his moment and because they couldn't, he didn't go.

"He (Ted Lindsay) was induced into the Hall of Fame in 1966, but declined to go to the ceremony because women weren't allowed into the event. He felt his wife and family were part of his career and they deserved to be there. The next year, the rules changed and families were invited."

I really enjoyed the historical parts of this book. One example, is how the Chicago Blackhawks got their name. In the 1920's, Major Frederic McLaughlin bought a Canadian team from Regina, Saskatchewan and moved it to Chicago.

"In civilian life, McLaughlin was the president of his family's coffee import business. He'd taken a leave of absence during the First World War to join a machine gun unit in the U.S. Army. His unit's nickname was the Blackhawks after Black Sparrow Hawk, a Sauk warrior (part of the Algonquian people) who fought on the side of the British in the War of 1812. And so that's what McLaughlin called his hockey team."

I also enjoyed the history behind some of the awards given out to exceptional hockey players and teams.

The Vezina, The Lady Byng and The Stanley Cup.

Wayne Gretzky throws in a few great stories of his own throughout the book as well, which I absolutely loved. I mean who doesn't love Wayne Gretzky? One particular story surprised me, a story of a trade that didn't go through, a trade to the Vancouver Canucks. I had to ponder that one for awhile since Vancouver is my team! I'm still trying to imagine what hockey would have been like if Gretzky had played for us. : )

I highly recommend this book to any and all hockey lovers. It would also make an excellent Christmas gift for loved ones who enjoy the game.