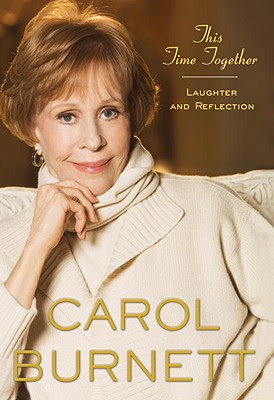 I recently read a memoir by comedian Carol Burnett called "This Time Together" It was nice to read  something lite and funny for a bit of a change! One funny story in the book stood out to me.

When she was young she was living in New York City and couldn't sleep one night, so she decide to go for a walk. Not a good idea. A man began to follow her and eventually grabbed her by the arm and said, "Okay, honey, let's go." Carol goes on to tell what happened next:

"I snapped. Turning around to face him (we were nose to nose), I opened my mouth, crossed my eyes, stuck out my tongue, and let out a scream heard up one side of Manhattan and down the other. I followed it up with the loudest Tarzan yell imaginable, and on the heels of that I began to cackle like the Wicked Witch in The Wizard of Oz. "HEE-HEE-HEE-HEE-HEE!" I then proceeded to sing at the top of my voice, "DING-DONG, THE WITCH IS DEAD!"

By this time the mugger was racing up the block and around the corner, never to be seen in my neighborhood again."

I laughed so hard when I read this, just imagine! I'm sure the look on this guys face was priceless. Way to go Carol Burnett!