This Father's Day, I bought my dad a book called "Unbroken: A World War II Story of Survival, Resilience, and Redemption" by Laura Hillenbrand. I had recently read it and loved it. He's loving it too. :) 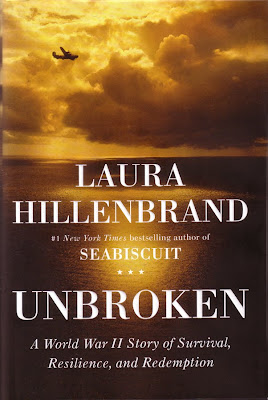 It follows the life story of Louie Zamperini, a juvenile delinquent-turned-Olympic runner-turned-Army hero. This is a very inspirational read. That he survived being lost at sea, and then the horrific things he goes through while in Japanese prison camps, seem not only unbelievable, but unthinkable.

He comes home hateful and vengeful, but God has other plans for this man and during a Billy Graham meeting his life is changed. I highly recommend this book even if you don't usually read biographies. It will  move you.

side note: I just found out Universal  Pictures has bought the rights to this book and is making it into a movie! I really hope they stay true to the book and Zamperini's life that has glorified and honored the Lord.

*December 2014 - I have now seen the movie and thought it was really well done, though it does leave the last part of the book out. Hopefully many will be encouraged to read the book after seeing the movie. I know many gasped in our theater when the afterwards stated Louis choose forgiveness over revenge.