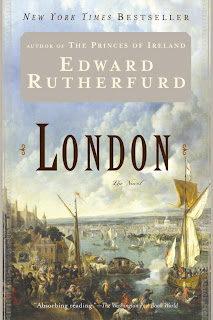 I found this novel to be overflowing with history and very entertaining. Though it's beginning had a bit of an evolutionary tone, it soon became a favorite of mine.

It starts out in 54 BC, along the banks of the Thames, before the city of London came into existence. The place was called 'Londinos.'

Told through several generations of families, the novel gives a thorough  history of the city and a sense of England. Each chapter is almost a novel in itself, as it skips through the years of London's history right up to the present.

Edward Rutherfurd did his homework and because of that, I have a great appreciation for his writing. I found this novel brought all the intriguing pieces of English history together in one text. I hardly noticed it was over 1000 pages! I especially enjoyed the chapter on London Bridge. I never realized its importance and how it was so much more than just a way into London. It stood in use for over 600 years. Edward Rutherfurd says here:

"By now, (1357) London Bridge was far more than just a crossing. In the century and a half since it was rebuilt in stone, the long platform on its nineteen arches had grown a massive superstructure. Down the centre ran a carriageway wide enough for two laden carts to pass; on each side were lines of tall, gabled houses jutting out over the river, and some of these buildings were joined across the thoroughfare by footbridges. Only one bridge, so that even the tallest masted vessels could pass upstream. There were two big gateways. At one, all 'foreigners' entering the city paid tolls. In the middle, enlarged into a two-story building, was the old chapel of St. Thomas Becket." 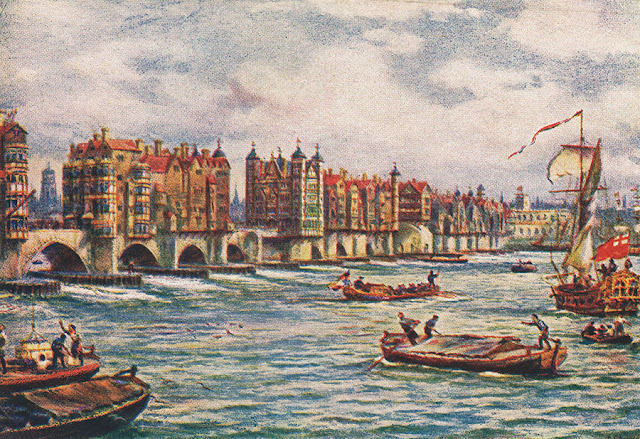 The Tudor years, as well as the effects of the Reformation were fascinating to read about and I found the author quite respectful and non-partisan in his writings of this time period.

From the times of the Roman occupation, to the days of kings of old, the horrors of the tower of London, the excessiveness of Hampton Court, the Reformation, the great Fire of London, the building of St. Paul's and the Crystal Palace, to World War I & II, you are taken into the world of London, England and swept back through time.

I've read several of Rutherfurd's novels and this one is by far my favorite. I would recommend it to all those who love England and her history.