Amazing Grace in the life of William Wilberforce 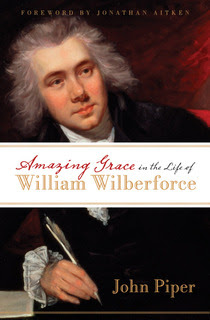 This book, written by John Piper, is a short intro into the extraordinary life of William Wilberforce. It is broken up into these six chapters:

1. His Early Life
2. 'God Has Set Before Me Two Great Objects'
3. A Multitude of Christlike Causes
4. Extraordinary Endurance
5. The Deeper Root of Childlike Joy
6. The Gigantic Truths of the Gospel

Before the Civil War, which ended slavery in America, there was a brave man who fought for the freedom of the slave in England.

William Wilberforce was a member of the British Parliament between 1787-1833. He worked diligently for years to defeat slave trading as well as slavery in England and with God's help, he accomplished both.

Wilberforce said of his purpose in parliament:

"The grand object of my parliamentary existence...If it please God to know me so far may I be the instrument of stopping such a course of wickedness and cruelty as never before disgraced a Christian country."

"He was not a political pragmatist. He was a radically God-centered Christian who was a politician."

Wilberforce was a wealthy man and when he became a Christian his view on money and power completely changed.

"One of the first manifestations of what he called 'the great change' - the conversion - was the contempt he felt for his wealth and the luxury he lived in...Seeds were sown almost immediately at the beginning of his Christian life, it seems, of the later passion to help the poor and to turn all his inherited wealth and his naturally high station into a means of blessing the oppressed."

"Considering them as in themselves, acceptable, but, from the infirmity of our nature, as highly dangerous possessions; and we are to value them chiefly not as instruments of luxury or splendor, but as affording the means of honoring our heavenly Benefactor, and lessening the miseries of mankind."

In the forward written by Jonathan Aithen, it states:

"The extraordinary tenacity he displayed over forty-six years of legislative warfare before the slave trade was abolished was an epic of Parliamentary perseverance."

Forty-six years! Now that is perseverance. What keep Wilberforce going? John Wesley (the great Methodist preacher) wrote to Wilberforce in 1791:

"Unless God has raised you up for this very thing, you will be worn out by the opposition of man and devils. But if God be for you, who can be against you."

"...in 1800, on his forty-first birthday, as he rededicated himself to his calling, he prayed,

'Oh Lord, purify my soul from all its stains. Warm my heart with the love of thee, animate my sluggish nature and fix my inconstancy, and volatility, that I may not be weary in well doing.'

God answered that prayer, and the entire Western world may be glad that Wilberforce was granted constancy and perseverance in his labors, especially his endurance in the cause of justice against the sin of slavery and racism."

Piper talks about Wilberforce's source of joy which gave him the endurance to carry on in his fight. Saying here:

"There is a deeper root of Wilberforce's endurance than camaraderie. It is the root of childlike, child-loving, self-forgetting joy in Christ."

"My grand objection to the religious system still held by many who declare themselves orthodox churchmen...is, that it tends to render Christianity so much a system of prohibitions rather than of privilege and hopes, and thus the injunction to rejoice, so strongly enforced in the New Testament, is practically neglected, and Religion is made to wear a forbidding and gloomily air and not one of peace and hope and joy."

How many people think of Christianity as a system of do's and don'ts? When in fact the gospel is full of peace, hope and joy! 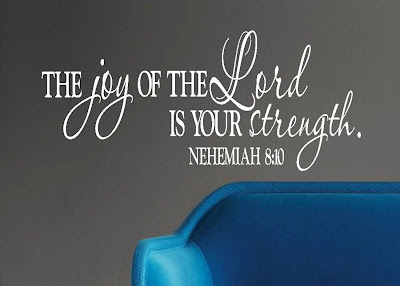 Piper says here of what Wilberforce saw of the nominal Christians of his day:

"He saw that the nominal Christians of his day had the idea that 'morality is to be obtained by their own natural unassisted efforts: or if they admit some vague indistinct notion of the assistance of the Holy Spirit, it is unquestionably obvious on conversing with them that this does not constitute the main practical ground of their dependence.' They don't recognize what constitutes a true Christian - namely, his renouncing 'with indignation every idea of attaining it by his own strength. All his hopes of possessing it rest altogether on the divine assurances of the operation of the Holy Spirit, in those who cordially embrace the Gospel of Christ.'

Piper ends his book with the gospel and how Wilberforce lived his life by it. He ends it with this:

"The joy of the Lord became his strength (Neh. 8:10). And in this strength he pressed on in the cause of abolishing the slave trade until he had victory.

Therefore, in all our zeal today for racial harmony, or the sanctity of human life, or the building of a moral culture, let us not forget these lessons: Never minimize the central place of God-centered, Christ-exalting doctrine; labor to be indomitably joyful in all that God is for us in Christ by trusting his great finished work; and never be idle in doing good - that men may see our good deeds and give glory to our Father who is in heaven (Matt. 5:16)."

In 1807 slave trading was abolished, but it wasn't until 1833, 26 years later, that slavery itself was outlawed. Three months later Wilberforce went to be with the Lord. The mission God had called him too had been accomplished and now he is enjoying his reward. : )