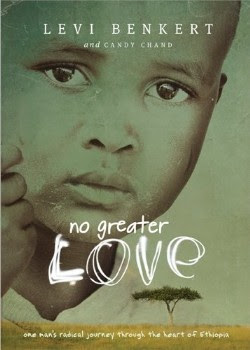 Last fall my daughter sat on a wooden bench in an African tent church that was built on a street of brothels. Children of prostitutes were running in and out as their mothers sat down to listen.

Most of the sermons were in the African language of the people but that night a missionary from America came to speak. My daughter was refreshed by his sermon. Mainly because it was in English and she could understand it. : )

She was encouraged by his words that night.


...About a month ago we were in our local book store and she thought this book, No Greater Love, sounded interesting because it was set in Ethiopia. I bought it for her and we headed home.

Once she began to read she realized this author was the speaker at that little tent church in Africa. This was exciting so I had to read this book too!

And what a beautiful book it is.

It all started with a short term missions trip.

This led Levi to children who were being rescued from certain death due to a superstition among the tribal people of Ethiopia. A superstition known as 'mingi.' If a child had any sort of defeat when born, it was considered cursed and had to be killed, often by their own parents.

Levi's heart broke for these children who needed some one to care for them.

The tribal people would let the children go as long as they were never returned. God called Levi and his family to do this.

I really appreciated Levi's honesty in this book. The hardships and questions. It felt real. God never seems to do things the way we plan them. But He always does them according to His perfect plan.

I love what he says in the introduction:

"...the truth remains: God needs no heroes to work for Him. He chooses the broken, the weary, the torn apart, the weak. If our family accomplished good, it wasn't because of us - it was because of Him."

And here he says of their journey:

"When I think back to this time in our family's life - the drastic transitions, the mistakes, the frustrating unknowns - I see only one constant: God. He was always there - covering mistakes, holding our hands, forgiving blunders, reaching deep into our hearts and healing. And for that, I am thankful."

Levi, his wife Jessie and their children are living in Ethiopia today and helping many children.

Please pray for them.

Watch the video about the book: