The Freedom of Self-Forgetfulness

Last week I went to my local Christian bookstore to bring in some used books in exchange for store credit. I had a few books in mind that I wanted to get, but ended up with completely different books!

I brought home these two and I'm excited to read them. The first is Randy Alcorn's novel, 'Safely Home' and secondly is A.W. Tozer's book 'God's Pursuit of Man.' 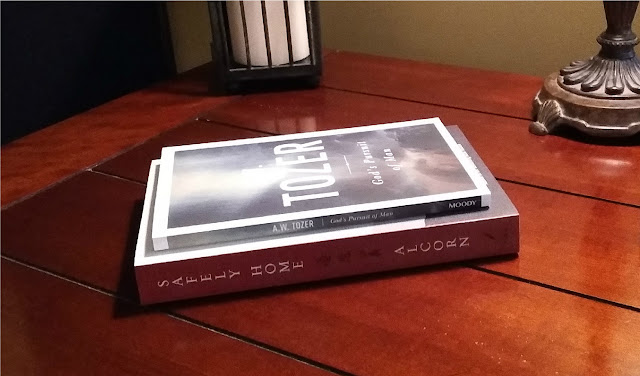 While I was browsing through the store the title of a booklet, by Tim Keller, caught my eye. It was called "The Freedom of Self-Forgetfulness: The Path to True Christian Joy." 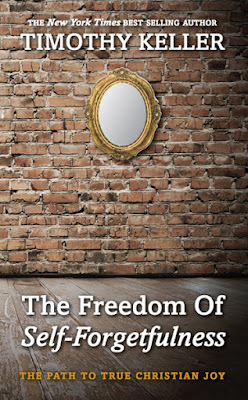 I debated on whether to purchase it or not and I ended up going home without it. I thought a lot about it in the days afterwards and decided to look it up on Amazon. The Kindle version was only $1.99 so I quickly bought it. I sat down and read it through in one sitting, it's only about 40 pages. : )

But what a moving 40 pages!

"So then, no more boasting about human leaders! All things are yours,

whether Paul or Apollos or Cephas or the world or life or death or the present or the future—all are yours,

and you are of Christ, and Christ is of God.

This, then, is how you ought to regard us: as servants of Christ and as those entrusted with the mysteries God has revealed.

Now it is required that those who have been given a trust must prove faithful.

I care very little if I am judged by you or by any human court; indeed, I do not even judge myself.

My conscience is clear, but that does not make me innocent. It is the Lord who judges me.

Therefore judge nothing before the appointed time; wait until the Lord comes. He will bring to light what is hidden in darkness and will expose the motives of the heart. At that time each will receive their praise from God.

Now, brothers and sisters, I have applied these things to myself and Apollos for your benefit, so that you may learn from us the meaning of the saying, “Do not go beyond what is written.” Then you will not be puffed up in being a follower of one of us over against the other.

For who makes you different from anyone else? What do you have that you did not receive? And if you did receive it, why do you boast as though you did not?"

What does Paul mean by this? About caring little about others judging him and not even judging himself?  Or that his conscience is clear, but he is not innocent? What does this have to do with high or low self-esteem? And why is he talking about court?

This little booklet goes into all these questions and explains them well. I admit I was moved to tears several times at the beauty of the gospel, shared within it's few pages.

The booklet is divided into an introduction and three chapters:

Introduction: The Freedom of Self-Forgetfulness

1. The Natural Condition of the Human Ego

2. The Transformed View of Self

3. How to Get That Transformed View of Self

Tim Keller's thoughts on high and low self-esteem stood out to me the most in chapter two. What is self-esteem and is it something Christians should even think about? He compares Paul's life to todays self-esteemed obsessed world.

Paul's approach could not be more different.

What would Paul say to those who tell him to set his own standards? He would say it is a trap. A trap he will not fall into. You see, it is a trap to say that we should not worry about everyone else's standards, just set our own. That's not an answer."

He goes on to explain why this is not an answer and why we shouldn't judge ourselves.

"When Paul says that he does not let the Corinthians judge him nor will he judge himself, he is saying that he knows about his sins but he does not connect them to himself and his identity. His sins and his identity are not connected. He refused to play that game. He does not see a sin and let it destroy his sense of identity. He will not make a connection. Neither does he see an accomplishment and congratulate himself.

He sees all kinds of sins in himself - and all kinds of accomplishments too - but he refuses to connect them with himself or his identity. So, although he knows himself to be the chief of sinners, that fact in not going to stop him from doing the things that he is called to do."

We should not connect our sins with ourselves and our identity, but instead, as Christians, our identity should only be in Christ. He is our righteousness. We die to self and live for Christ. We think on Him and live in obedience to Him. We care only what He thinks. He is our judge. We repent and move on. God deals with our sin, and removes it from us as far as the east is from the west (Psa 103:12). We live for Christ.

With the rising movement of self-esteem, even in the church today, self-forgetfulness is a foreign concept, but it's what Paul taught and lived and what we are called too as well.

He then talks about gospel-humility:

A few things to think about! I will leave you with this beautiful quote...

"The essence of gospel-humility is not thinking more of myself or thinking less of myself, it is thinking of myself less."