She Came To Slay - The Life and Times of Harriet Tubman 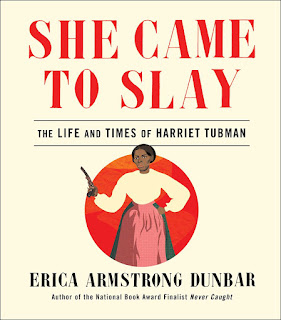 A few months ago I watched the movie 'Harriet' which was based on the life of Harriet Tubman. She was considered the Moses of her time, and I was curious to learn more about her. This book was a great introduction to her life and work, and what an extraordinary life she led.

With all that's going on in the world, we desperately need the Lord, and Harriet was a great example of someone who depended solely on Him in hard times. It was so encouraging to read her story. A story of going deep into the heart of slavery to rescue her family, to working with the abolitionists of the time, as well as being a spy and nurse during the civil war.


As I read about her accomplishments they almost seemed impossible, but they reminded me of Matthew 19:26...

"But Jesus looked at them and said to them, 'With men this is impossible, but with God all things are possible."

“I am the vine, you are the branches. He who abides in Me, and I in him, bears much fruit; for without Me you can do nothing"


God worked through her because she abided in Him and therefore many were saved from a life of slavery.

And Harriet always gave Him the glory.

Harriet suffered much during her life. One struggle being severe headaches for most of her life caused by an angry overseer in her youth.

The author relates the story here:

"...Araminta (Harriet) and an enslaved cook from the same farm were sent on an errand for what was supposed to be a quick, uneventful trip to the store to pick up a few items needed for the house....An overseer was in hot pursuit of the man who had the audacity to abandon his post, as if he were free. And his pursuer had every intention of whipping him. Tension was palpable within the walls of the store. The overseer ordered Araminta to help tie down the enslaved man, but she refused, allowing the slave the opportunity to slip out of the store. In fury, the overseer picked up a two-pound weight off the counter and hurled it in the direction of the runaway. Araminta's head received the full force of the iron weight instead. The impact broke her skull, as she later recalled...

"It cut a piece of that shawl clean off and drove in into my head. They carried me to the house all bleeding and fainting. I had no bed, no place to lie down on at all, and they lay me on the seat of a loom, and I stayed there all that day and the next."

She was never treated for her injury and was forced back to work. Harriet is quoted again here:

"I went to work again and there I worked with the blood and sweat rolling down my face till I couldn't see."

And yet miraculously she went on to accomplish much.

Harriet persevered when most would have given up. Her strength was incredible and her determination brought much change. We can learn a lot from her - to have faith and dependence on God, a strong work ethic, and to never give up on the good fight.

Harriet was a woman to look up to, but more importantly her life showed how to look to God for strength and direction and to put our trust in Him for all things.


I really enjoyed this book and I look forward to finding new reads that share her extraordinary life.

I highly recommend this book!