A Memoir of C.S. Lewis 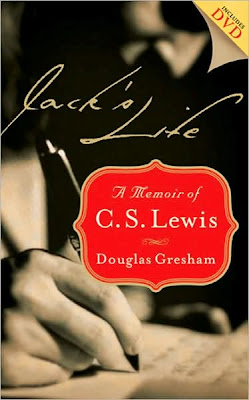 Douglas Gresham writes a loving book about his step father in "Jack's Life" He honors C.S. Lewis and the impact he had on the lives of those he knew. He says here:

"Jack was the finest man and best Christian I have ever known. I loved him and dearly cherish his memory."

He starts with Lewis's childhood and continues through his college years and then into his later years.

While Lewis was in college he met Edward (Paddy) Moore. They became fast friends and eventually went off to the first world war. They made a pact to take care of each others families if one of them should be killed in battle.

Paddy didn't make it...and Lewis stayed true to his word and took in Paddy's mother and sister Maureen, who ..."had fled from a broken marriage and had been left totally isolated by the death of her son, Paddy. She had moved from place to place living in rented and often crowded accommodations, always poor and always insecure."

He also took in his alcoholic brother and gave him a secure home as well. The book goes on to tell of how Lewis met Joy (Gresham's mother) and his recollections of those days.

As much as I admire Lewis for his written works (he is one of my favorite authors) his servant heart and actions during his life speak much louder and really show what kind of man he was. Jesus was not just someone Lewis talked or wrote about... he walked with Him and served Him by serving others.

I really enjoyed this book and recommend it to anyone who loves C.S. Lewis and would like to get to know him better.