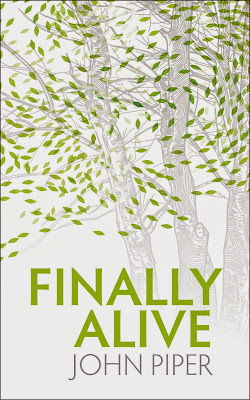 These kinds of books are why I started blogging. Books that are full of life changing truth.

This book deals with the new birth or what Jesus called being born again.

In this book we learn:


John Piper is thorough in explaining each question and answers all from Scripture. It was basically a Bible study rich in Biblical truth.

Every. Single. Chapter. Stood out to me.

But there was one chapter that caught my attention a little more than the others because it dealt with things that I struggled with growing up.

In chapter ten, it deals with the idea of losing your salvation, also called falling away, something that was taught in the church I grew up in. It always terrified me. The thought of losing my salvation caused me to be leery to give my whole heart to a God who may at anytime decide to 'unsave' me.

It caused me to never fully trust in Him.

But I've since found the Scriptures teach otherwise and this brings me such joy!!

When we are truly born again God will not leave us when we fall, instead he will convict us by His Holy Spirit and bring us to the truth once again.

In this chapter John Piper uses Scripture, namely 1 John, to share that God is trustworthy in giving eternal salvation to those who truly believe, but that there are also those who seem to believe but are not really born again and how to test this.

Another mistaken effect that these tests might have on our minds is to make us think we can lose our salvation. They might make us think that we can be born again for a while and then begin to fail in these tests and die and lose the spiritual life that we were given in the new birth. That would be another serious mistake.

John is very aware that his words could be taken in these two wrong ways. So he is as explicit as any writer in the New Testament that this is not the case:

Christians are not sinless, and born-again people cannot lose the new birth and be lost.

So John is at pains to say that, 'walking in the light'(1:7) does not mean walking flawlessly. It means that, when you stumble, the light of Christ causes you to see your stumbling as sin and hate it and confess it and receive forgiveness and move forward with Christ.

And John is just as jealous to make sure we don't infer from these 'tests of life' that we can be born again and then later lose our life and be lost. 1 John 2:19 is one of the clearest statements in the Bible that there is another way to understand what happens when a person abandons the church. It says:

'They went out from us, but they were not of us; for if they had been of us, they would have continued with us. But they went out, that it might become plain that they all are not of us.'

Notice three things John says to protect us from misunderstanding.

1) Those who seemed to be born again and forsook the faith never were born again - they never were of us. 'They went out from us, but they were not of us.' In other words, the explanation is not that they lost their new birth. They never had it.

2) Those who are truly born again (who are 'of us') will persevere to the end in faith. Verse 19: 'If they had been of us, they would have continued with us.'


3) God often makes plain who the false Christians are in the church by their eventual rejection of the truth and the people of God. Verse 19: 'They went out, that it might become plain that they all are not of us.' It became plain. So today it often becomes plain who are 'of us.'

You recall that one of the tests of life in 1 John 4:6 was that those who truly know God listen to the apostolic teaching. They love it, and they cling to it. 'Whoever knows God listens to us; whoever is not from God does not listen to us.' These people listened for awhile. The seed of the word sprang up, perhaps even with joy and it looked as though they were truly born again.

But then hard times came and the cares and riches and pleasures of life swept them away, and they showed that they had never been born again."

"And when a great multitude had gathered, and they had come to Him from every city, He spoke by a parable:

'A sower went out to sow his seed. And as he sowed, some fell by the wayside; and it was trampled down, and the birds of the air devoured it.

Some fell on rock; and as soon as it sprang up, it withered away because it lacked moisture.


But others fell on good ground, sprang up, and yielded a crop a hundredfold.' When He had said these things He cried,

...Now the parable is this: The seed is the word of God.

'Those by the wayside are the ones who hear; then the devil comes and takes away the word out of their hearts, lest they should believe and be saved.

But the ones on the rock are those who, when they hear, receive the word with joy; and these have no root, who believe for a while and in time of temptation fall away.

Now the ones that fell among thorns are those who, when they have heard, go out and are choked with cares, riches, and pleasures of life, and bring no fruit to maturity.

But the ones that fell on the good ground are those who, having heard the word with a noble and good heart, keep it and bear fruit with patience."

I found this book to be one of the most encouraging books I've read. I think it was all that Scripture that came to life!

I hate to only point out just one chapter from this book, as everything in it was noteworthy and flows together beautifully to give us a greater understanding of the new birth.

It will strengthen your faith in the God who has given you the greatest gift...new birth.


*NOTE - Reading the book of 1 John before reading John Pipers words will help in understanding.