Simeon and the Cure

I thought I'd share a few lines from a book by A.W. Tozer, that reminded me of what Christmas is really about:

"Mankind is still inventing new ways of self-treatment and medication for failures and weaknesses and wrong-doing, even in our own day, not recognizing that the cure has already come.

Simeon, the old man of God who had waited in hope around the temple, knew that the cure had come! When he saw the baby Jesus, he took Him up in his arms, looked down at Him and said,

"Lord, now You are letting Your servant depart in peace...for mine eyes have seen Your salvation." (Luke 2:29-30) 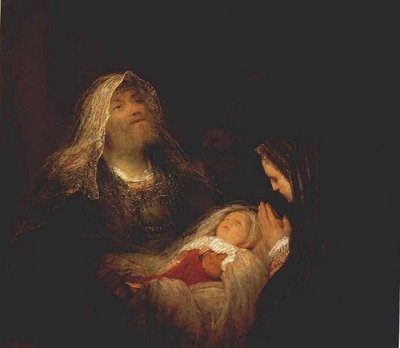 We live in a world that is always coming up with a new remedy, a new plan, or a new way of doing things. A world that tells us to look within ourselves for peace, grace and salvation. When in reality this world really has nothing of worth to offer us, and we have nothing of true worth without Christ. Nothing that will matter in the end.

Oh, but what joy Simeon must have felt as he held Jesus in his arms! Jesus!  Knowing this was the Son of God who would take away the sins of the world! The One that would make things right. The One who is the cure.

"And behold, there was a man in Jerusalem whose name was Simeon, and this man was just and devout, waiting for the Consolation of Israel, and the Holy Spirit was upon him.

And it had been revealed to him by the Holy Spirit that he would not see death before he had seen the Lord’s Christ.

So he came by the Spirit into the temple. And when the parents brought in the Child Jesus, to do for Him according to the custom of the law,

he took Him up in his arms and blessed God and said:

'Lord, now You are letting Your servant depart in peace,
According to Your word;

For my eyes have seen Your salvation

Which You have prepared before the face of all peoples,

A light to bring revelation to the Gentiles,
And the glory of Your people Israel.'

And Joseph and His mother marveled at those things which were spoken of Him. Then Simeon blessed them, and said to Mary His mother,

'Behold, this Child is destined for the fall and rising of many in Israel, and for a sign which will be spoken against

(yes, a sword will pierce through your own soul also), that the thoughts of many hearts may be revealed.”
Luke 2:25-35


Jesus is the cure.

Definition of a gift:

-something given voluntarily without payment in return, as to show favor toward someone

“Peace I leave with you, My peace I give to you; not as the world gives do I give to you. Let not your heart be troubled, neither let it be afraid." John 14:27

"For the wages of sin is death, but the gift of God is eternal life in Christ Jesus our Lord." Romans 6:23

"For by grace you have been saved through faith, and that not of yourselves; it is the gift of God" Ephesians 2:8


I thank God for His gifts, through His son Jesus Christ, who's birth we celebrate at Christmas. Praise Him!

* Note - I will be taking a blogging break until after Christmas, but will be back at the end of the month with my '10 Great Reads of 2015.'