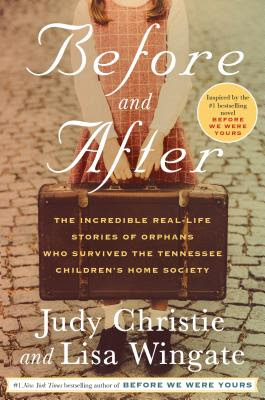 Before and After by Judy Christie and Lisa Wingate

I recently read Lisa Wingate's novel, 'Before We Were Yours' which was based on the real-life scandal where children were being kidnapped and than sold through adoption by Georgia Tann, the director of a Memphis-based adoption organization.

This book contains true stories from those who suffered by the hands of Georgia Tann and the Tennessee Children's Home Society.

"From the 1920s to 1950, Georgia Tann ran a black-market baby business at the Tennessee Children's Home Society in Memphis. She offered up more than 5,000 orphans tailored to the wish lists of eager parents--hiding the fact that many weren't orphans at all, but stolen sons and daughters of poor families, desperate single mothers, and women told in maternity wards that their babies had died.

The publication of Lisa Wingate's novel Before We Were Yours brought new awareness of Tann's lucrative career in child trafficking. Adoptees who knew little about their pasts gained insight into the startling facts behind their family histories. Encouraged by their contact with Wingate and award-winning journalist Judy Christie, who documented the stories of fifteen adoptees in this book, many determined Tann survivors set out to trace their roots and find their birth families.

Before and After includes moving and sometimes shocking accounts of the ways in which adoptees were separated from their first families. Often raised as only children, many have joyfully reunited with siblings in the final decades of their lives. Christie and Wingate tell of first meetings that are all the sweeter and more intense for time missed and of families from very different social backgrounds reaching out to embrace better-late-than-never brothers, sisters, and cousins. In a poignant culmination of art meeting life, many of the long-silent victims of the tragically corrupt system return to Memphis with the authors to reclaim their stories at a Tennessee Children's Home Society reunion . . . with extraordinary results." 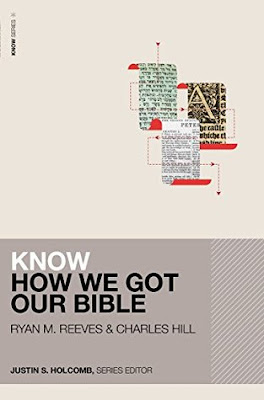 Know How We Got Our Bible by Ryan M. Reeves and Charles Hill

I just started this one and enjoying it quite a bit.  I'm looking forward to reading more about how the Bible came to be.

It is a fairly short read and looks great for those who are wanting to learn about the history of the Bible.

The back cover say here:

"In Know How We Got Our Bible...scholars Ryan Reeves and Charles Hill trace the history of the Bible from its beginnings to the present day, highlighting key developments and demonstrating the reliability of Scripture.

Including reflection questions and recommended readings for further learning, Know How We Got Our Bible is an excellent introduction for formal students and lay learners alike." 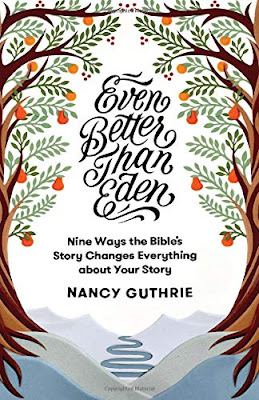 Even Better Than Eden by Nancy Guthrie

Last year I read an advent book that Nancy Guthrie had compiled from Christian writers called, 'Come, Thou Long-Expected Jesus.' Which was really good, but I've never read anything by Nancy, herself. This one looks interesting!

"Most people--Christians and non-Christians alike--are familiar with the garden of Eden, the perfect paradise that God created for the first man and woman. However, many don't realize the Bible teaches that God is preparing an even better world for his people in the future new creation.

In this book, experienced Bible teacher Nancy Guthrie traces 9 themes--the tree of life, garden and wilderness, the image of God, clothing, Sabbath rest, marriage, the seed of the Serpent, the temple, and the city of Jerusalem--throughout the Bible, revealing how God's plan for the new heaven and the new earth is far better than anything we can possibly imagine." 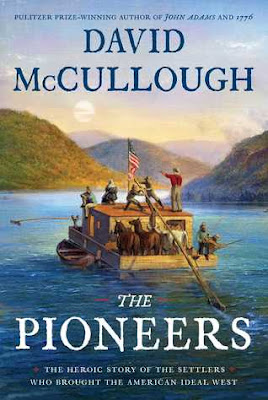 The Pioneers by David McCullough

I really enjoy reading David McCullough's books! He makes history come alive with his writing and you don't feel like you are reading a history book. This one sounds so interesting!  I'm looking forward to reading it.

"Pulitzer Prize–winning historian David McCullough rediscovers an important and dramatic chapter in the American story—the settling of the Northwest Territory by dauntless pioneers who overcame incredible hardships to build a community based on ideals that would come to define our country.

As part of the Treaty of Paris, in which Great Britain recognized the new United States of America, Britain ceded the land that comprised the immense Northwest Territory, a wilderness empire northwest of the Ohio River containing the future states of Ohio, Indiana, Illinois, Michigan, and Wisconsin.

A Massachusetts minister named Manasseh Cutler was instrumental in opening this vast territory to veterans of the Revolutionary War and their families for settlement. Included in the Northwest Ordinance were three remarkable conditions: freedom of religion, free universal education, and most importantly, the prohibition of slavery. In 1788 the first band of pioneers set out from New England for the Northwest Territory under the leadership of Revolutionary War veteran General Rufus Putnam. They settled in what is now Marietta on the banks of the Ohio River.

McCullough tells the story through five major characters: Cutler and Putnam; Cutler’s son Ephraim; and two other men, one a carpenter turned architect, and the other a physician who became a prominent pioneer in American science. They and their families created a town in a primeval wilderness, while coping with such frontier realities as floods, fires, wolves and bears, no roads or bridges, no guarantees of any sort, all the while negotiating a contentious and sometimes hostile relationship with the native people. Like so many of McCullough’s subjects, they let no obstacle deter or defeat them.

Drawn in great part from a rare and all-but-unknown collection of diaries and letters by the key figures, The Pioneers is a uniquely American story of people whose ambition and courage led them to remarkable accomplishments. This is a revelatory and quintessentially American story, written with David McCullough’s signature narrative energy." 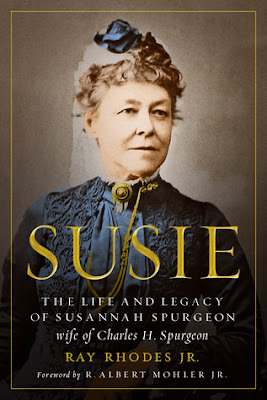 Susie: The Life and Legacy of Susannah Spurgeon by Ray Rhodes Jr.

Charles Spurgeon is one of my favorite preacher authors to read. He fought the good fight, and through many difficulties he keep his faith in God.

This book is about his wife Susannah. I don't know much about her, so I'm really looking forward to reading this one.

"While many Christians recognize the name of Charles H. Spurgeon, the beloved preacher and writer, few are familiar with the life and legacy of his wife, Susie.  Yet Susannah Spurgeon was an accomplished and devout woman of God who had a tremendous ministry in her own right, as well as in support of her husband.

Even while dealing with serious health issues, she administered a book fund for poor pastors, edited and published her husband’s sermons and other writings, led a pastor’s aid ministry, wrote five books, made her home a hub of hospitality, and was instrumental in planting a church. And as her own writing attests, she was also a warm, charming, and fascinating woman.

Now, for the first time, Susie brings this vibrant woman’s story to modern readers. Ray Rhodes Jr. examines Susannah’s life, showing that she was not only the wife of London’s most famous preacher, but also a woman who gave all she had in grateful service to the Lord.

Susie is an inspiring and encouraging account of a truly remarkable woman of faith that will delight Spurgeon devotees and fans of Christian biographies alike."